BC Riders Shine at The Royal Horse Show in Toronto 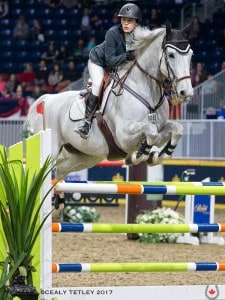 BC riders took to Toronto to attend The Royal Horse Show at the Royal Agriculture Winter Fair in Toronto running from November 3rd to 12th.

Julia Madigan of Vancouver, BC claimed the 2017 National 1.40m Junior/Amateur Jumping Championship, presented by Dominion Regalia, on November 5th. This was Julia’s first time attending the Royal Horse Show and it did not disappoint, having a very successful week aboard her mount Farfelu du Printemps (Action Breaker x Darco), a 12-year-old Belgian Warmblood gelding owned by her father, John Madigan. Julia also placed fourth in the first phase of the Uplands Under 25 Jumping National Championship on November 11th and third place in the second phase.

Overall it was a wonderful representation of our BC riders at the Royal Horse Show and a great job by all.